We would like to thank all our friends who helped make the show great and without whom it would not have existed.

Franz Pomsar who put up all the shelves and helped distribute the posters and flyers all across town.
Without him, the show could not have happened. #1 HELPER! 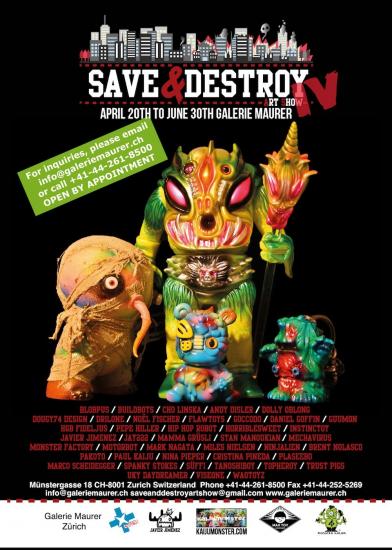 After three previous shows in Spain, SAVE & DESTROY comes back with its fourth exhibition of Kaiju and Tokusatsu themed art, but this time in a different location: the city of Zurich in Switzerland.

Kaiju, 怪獣 in Japanese, means strange beast or, as it is commonly translated, monster. Monsters, known worldwide as Godzilla or King Kong, are directly related to the concept of Kaiju, and their movies belong to the Kaiju-eiga genre (monster movies). From the Japanese point of view, the concept of Kaiju includes almost any monster, including western monsters like vampires or mummies, whereas western cultures reduce the concept to only monsters of Japanese origin, those who appear in Japanese movies and series or folklore. From the very moment in which the first Godzilla (Gojira) movie appeared in 1954, the character has turned into one of the symbols of Japanese culture.

Tokusatsu, 特撮 in Japanese, means 'special filming'. Outside Japan, the term is used mainly to refer to movies or television dramas that feature superheroes and make use of special effects. In the late 60s, Ultraman was created, giving birth to probably the most popular series in this genre. Although Tokusatsu tends to include only live-action dramas with use of special effects, there are many animated series that include features from the Kaiju and Tokusatsu genre, e.g. Mazinger Z.
There is no doubt that the cultural effect of both genres, Kaiju and Tokusatsu, was enormous, and entire generations of children and young people dreamed of becoming superheroes and defeating giant monsters. These children, crazy about these monsters, started collecting vinyl toys that represented their favorite characters and helped the phenomenon of Kaiju and Tokusatsu to gain its own place in Japanese culture.
These days, there is a worldwide increase of interest in the Kaiju and Tokusatsu phenomenon, especially coming from artists who grew up watching those series and playing the superheroes, and it is obvious that nostalgia plays an important role in this revival of the genre through arts.

SAVE & DESTROY was born to bring Kaiju and toy culture to Spain, a country where art toys are not well known. The first three exhibitions were located at Comic Conventions, where many people gather to enjoy different kinds of art.
Now, it is time to bring SAVE & DESTROY to the world outside Spain, starting with Zurich in Switzerland. Together with Beatrice Seifert from Galerie Maurer and Martijn De Zwart from KaijuMonster Blog, Javier Jimenez, the creator of SAVE & DESTROY, decided to host the fourth show at Galerie Maurer in Zurich.
The situation in Switzerland regarding art toys seems to be similar to that of Spain. Very few people are aware of the existence of this peculiar kind of art, and the dearth of locations displaying or selling these products makes Zurich an ideal location to have the fourth edition of the SAVE & DESTROY show.

SAVE & DESTROY IV will feature works from artists who are well known in the Kaiju scene, such as Mark Nagata, Mechavirus, or Paulkaiju from the USA, or NinjAlien, BLObPUS, or ukyDaydreamer from Japan. The Zurich show, however, is about not only Kaiju and Tokusatsu, but urban art and designer toys in general. Artists like Hip Hop Robot, DrilOne, and VISEone will represent this side of the toy culture. SAVE & DESTROY IV is especially interested to include Swiss artists and will present works by Hgb Fideljus, Cho Linska, Andy Disler, Noël Fischer, Mamma Grüsli, Pepe Hiller, Süffi, Nina Pieper, Marco Scheidegger, and WaoToyz.